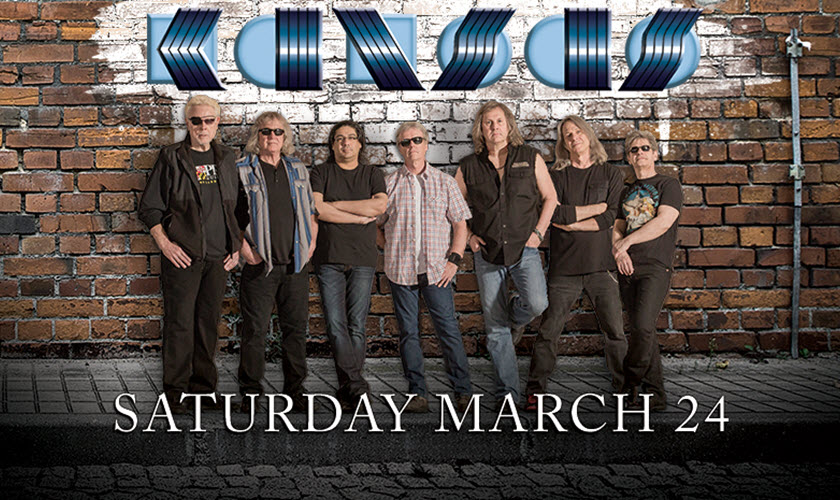 With more than 30 million albums sold worldwide, it is no stretch to say that the 15 studio albums and 5 live albums created by Kansas have had a profound impact on the music industry. In fact, the band continues to create and inspire current generations with a sound and experience that spans four decades.

Bands are only as successful as their musicians and Kansas has been privy to some of the best like Richard Williams. Richard has been part of the group since 1974 and has played on every album produced. Not only is he an amazing guitarist, he also co-wrote some of the iconic hits like “Can I Tell you,” “No Room For A Stranger,” and “Play The Game Tonight.” Richard took a few minutes from their current tour to answer a few questions about life and his time with Kansas.

You’ve been playing for over four decades! What keeps you excited to play?

I dabbled in a “real job” a few times in the past. Didn’t care for it. What I get to do is more like a fantasy job happening in reality.

After forty-five years, I’m not sure I would know how to re-assimilate into the civilian population. I’ve seen what’s behind the curtain too many times.

I get to make a living traveling all over the world, playing guitar with a great bunch of guys, in a great band that has a legacy to be very proud of. What’s not exciting about that?

Can you describe what it is like to perform for sold-out arenas around the world?

The joy is in the work. The preparation, practice, rehearsals, finding new gear to add to my rig, the camaraderie, the shows, sharing the experience with my wife, and the gratitude I have for actually getting to do this. “Sold out” is just icing on the cake.

Can you describe what it is like to perform for sold-out arenas around the world?

The joy is in the work. The preparation, practice, rehearsals, finding new gear to add to my rig, the camaraderie, the shows, sharing the experience with my wife, and the gratitude I have for actually getting to do this. “Sold out” is just icing on the cake.

Of all the Kansas albums, which one was the hardest to complete and why?

Drastic Measures for sure. It was the first album without a violin in the mix, Kerry Livgren and Dave Hope both seemed to have one foot out the door, and before completion I discovered my first future ex was sleeping with the producer. That was a hard album to complete ...

“Dust In The Wind” has been played over 3 million times on the radio, which equals to over 18 straight years of non-stop repeat. How does that make you feel?

I don’t think your facts are correct. That’s how many times I’ve played it. :)

But seriously, for me it always comes back to the live performance. While I recorded the original track, more importantly, I am THE GUY that gets to start “Dust” every night. Everyone in the building knows every word, most have a personal connection to it. I’m a lucky man to relive that experience time and time again.

Life on the road can get tiring. What are some things you do as a group to have fun and relax off the stage during the tour?

For fun and relaxation I used to drink the town dry. Never before a show, but after the show, or on days off, that was my lifestyle. As I got older, it stopped being fun and became a nasty addiction.

During the last ten plus years I’ve found that getting plenty of sober sleep is the most relaxing thing to do. The job is already fun, but a good night’s sleep is often hard to come by. Get it when you can.