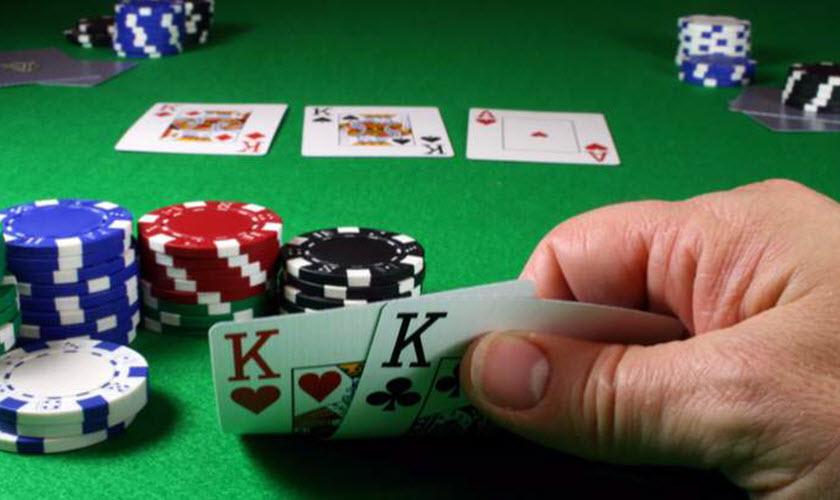 Are you fascinated by the Texas Hold’em Tournaments you see on TV, but are unclear on how to play? We’re here to give you some gaming 101 tips!

Texas Hold’em is a poker game where the players try to make the best possible five-card poker hand utilizing the two facedown cards “hole cards” dealt them and the five face-up cards “community cards” dealt for the whole table. The game is dealt in four rounds allowing for players to bet, analyze, check, bluff, and fold. At the end of the rounds, the best hand wins the pot!

So, before we help you get to the winning pot, let’s get through a few basics on how the game is dealt.

Play moves around the table clockwise, starting with the player to the left of the dealer button. “the button,” which is a round disc which sits in front of a player, dictates which players must post small and big blind bets. It also determines where the dealing of the cards begin. The player immediately left of the button receives the first card and is responsible for the small blind. Then, the dealer delivers cards around the table clockwise until each player receives two starting cards. The second player to the left of the button, and player dealt is responsible for the big blind bet. Don’t worry you won’t always be the big blind as the button rotates one seat to the left every hand. The rounds – preflop, flop, turn, and river – all offer betting opportunities once the dealing is complete.

Now that some formalities are explained, let’s get to it!

Once the big blind and small blind bets are placed the first round may begin. All players are dealt two hole cards and the first player to act is to the left of the big blind. This player can either:

Call – match the amount of the big blind

Raise – increase the bet within the specific limits of the game (most commonly in a no-limit game, the minimum opening raise must be at least twice the big blind, but please ask poker room for current policies)

After the first player acts, play proceeds in a clockwise fashion around the table with each player having the same three options – call, raise, fold. Once the last bet is called and the table action is “closed,” the preflop round is over and play moves on to the flop.

Second Betting Round: The Flop

The flop consists of the first three community cards dealt the table. These cards are placed face up in the middle of the table for all the players to use to construct the best possible hand. Once the flop is dealt, betting again starts with the first active player directly to the left of the button.

As in the first betting round a player can either call, fold, or raise, but now the player can also “check.” A check means to pass the action to the next player in the hand, this can only be done if no betting action has occurred beforehand. Betting will continue until the last bet or raise has been called. If all players check, this also closes the betting round.

Third Betting Round: The Turn

The Turn, also known as the fourth community card, is once the flop betting round is completed. After the turn betting continues as it did in the previous round.

Final Betting Round: The River

After betting has completed during the turn, a final community card called the river is dealt. Now that all cards are dealt, players utilize their two hole cards and the five face-up community cards to create the best possible five-card poker hand. Betting resumes with the first active player to the left of the button.

Once all betting action is completed, the remaining players in the hand participate in “the showdown.” The showdown is when all remaining active players expose their hole cards to determine a winner.

So, who wins? The dealer analyzes each player’s hole cards to determine who has the best possible five-card poker hand according to traditional poker hand rankings. If you are new to the game that could be confusing so here is a rundown of the hands:

Four of a Kind – four cards of the same rank

Flush – any five cards of the same suit

Three of a Kind – three cards of the same rank

One Pair – two cards of the same rank

Still unsure about playing Texas Hold’em? Just let the dealer know it's your first time playing, and they will be happy to help you learn at The Poker Room at Four Winds South Bend.